I would like to share with you three unexpected benefits from jumping out of a plane. Then if you ever decide to do something as ridiculous as strapping yourself to a stranger and leaving a functioning aircraft at 13,000 feet above the Earth’s surface, you will have been given a helping hand from my insights beforehand.

Doing a tandem skydive was the very last activity in my year of checking off 40 bucket list items to celebrate my significant birthday milestone during 2016. I predicted that I would feel exhilaration and a sense of accomplishment but there were also unforeseen wins from jumping out of a plane:

1) Unexpected Benefit – The Power of Deadlines

I was happy to end the bucket list challenge on such a high note (literally) but was also kicking myself that I had not done the skydive much earlier in the year. I could have done it any time but I procrastinated, as it was the most terrifying item on my bucket list.

There was not just a one-hour drive and the twenty-minute plane ride to think about the jump, but almost 365 days to stew on it. I am almost a bit jealous of the guy who turned up at the skydiving spot with a blindfold on and was told by his gleeful friends that he was getting a tandem jump for his birthday.

It is always advised to link a goal with a deadline but I never fully realized the power of deadlines until the skydive. I set a goal to check 40 things off my bucket list during the calendar year. I jumped out of a plane on the 30th December, one day before my deadline. Yes it was self-imposed. And no one would care if I jumped out on the 1st January. But I would have. As I had completed the rest of my bucket list and there was a deadline looming, completing the jump became more important than the fear.

One of the more surprising learnings is now that I have done a tandem skydive, other scary things seem less frightening. Since the jump I have seen a film (The Cabin in the Woods) that I previously decided was too terrifying to watch.

I am looking forward to where my newfound courage takes me – I may one day be quite okay being in close quarters with a spider.

Completing the bucket list, and especially doing the skydive, contributed to 2016 being the best year of my life (so far). I was trying to work out what made it so great and came up with a few reasons.

Firstly, I designed the bucket list to cover many things I had wanted to do for some time and it made me feel in control of my own life, a rarity these days. Also, the whole idea took some planning and hard work to execute and when I put time and effort into things I often feel more satisfied. I was probably better off than the guy who got the surprise tandem jump gift after all. Plus as I set myself a challenge and told everyone about it I built discipline, confidence and integrity. Most of all, I learned to have fun again.

Feeling more in control of my life, in alignment with attributes I value and simply being happier means I show up as a better person. And I have the ability to spread this to my loved ones and the general population. Who would have thought that skydiving has the potential to save the world!?

Sure, jumping out of a plane is a lot like giving birth – it is an overwhelming sensory experience, it is painful (not physically, just on the wallet), and in both instances you ask yourself ‘what the heck was I thinking?’

However, these three unexpected benefits of jumping out of a plane – discovering just how powerful deadlines can be, how doing one fearful thing can make you braver in other situations, and how tandem skydiving has the potential to grow you as a person and ultimately have a positive impact on the world – means that, up there with having my children, it was one of the best things I have ever done. 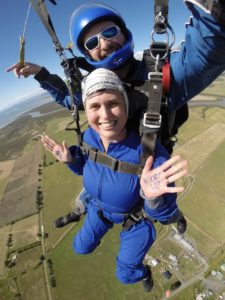 Do you want to jump out of plane as part of your bucket list? Check out my book, Bucket List Blueprint to start writing and checking off your own bucket list today.