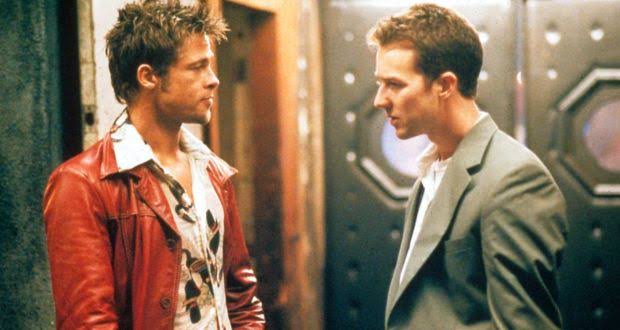 The film, Fight Club, starring Brad Pitt at his shining best and Edward Norton being his most Edward Norton, was released twenty years ago and over time became a cult classic.

On the surface, this violent but brilliant film is about a guy who loses everything and starts an underground boxing club. However, the film is really about challenging cultural norms that cause us to be mindless consumers. It is crammed with memorable lines such as “the things you own end up owning you”.

Full of great scenes, arguably the most unforgettable is when Brad Pitt’s character, Tyler Durden, talks about the rules of fight club: “The first rule of fight club is…”

In homage to a film that promotes minimalism in an extreme manner, here are three rules of decluttering…

The first rule of decluttering is to declutter first THEN organize. Never try and organize your things until you have put aside everything you do not want any more. You don’t have to throw your ‘remove’ pile in the trash, but the stuff needs to be physically taken out of that area so you can see what is remaining and then figure out how to organize it all in a way that makes sense.

Remember, items should fill up a space to no more than about 80% full. You shouldn’t have to cram them back in. If the stuff still doesn’t fit then question whether you have decluttered ruthlessly enough, whether they need to be stacked more efficiently or whether some items need to be relocated to another part of the house.

Declutter first THEN organize and hopefully you do not need to purchase additional storage.

2) Second Rule of Decluttering – Do Not Declutter Others’ Stuff

The second rule of decluttering is do not declutter others’ stuff. You may get resistance from others in the household but do not take that as an invitation to declutter their things. Their stuff is off limits.

You can try and explain how important and beneficial decluttering is. And you could coax others in your home into keeping their things in one or two areas, not all over the place. Aim to be the lighthouse and model fun, easy, practical minimalism, and hope they change their perspective. Be patient and let them be empowered to make their own decisions.

The good news is that you have plenty of scope to do a majority of decluttering on your own stuff and in the communal areas of your home even if your family is not on board. Start there and show them how great a decluttered space can be.

The third rule of decluttering is to never, ever start decluttering with heirlooms, memorabilia, keepsakes and collections. These sentimental items are often valuable, unique or emotionally-charged, and thus take longer to sift through and make decisions about. Decluttering sentimental items first is a surefire way to fail your declutter venture before you even begin.

Start with everyday and easily replaceable household items and build up your decluttering decision-making muscles. Then, and only then, tackle your kids’ artwork, old photos and that unsightly vase inherited from your dearly departed aunt.

This may horrify the pure minimalists—don’t discard sentimental items at all. Sentimental things take up a relatively small proportion of your total household belongings, so just leave them out of your decluttering project, at least initially. Set a date to sort them later if you like.

In order to make your home decluttering as stress-free as possible, follow the three rules of decluttering: declutter before organizing, do not declutter others’ stuff and never begin decluttering with your sentimental items.

Of course, unlike the rules of fight club, there are no hard and fast rules of decluttering. These are just recommended guidelines to make simplifying your things easier for you.

And quite unlike the first two rules of fight club, which are about not talking about fight club, you are actively encouraged to discuss decluttering! Tell me what is stopping you from decluttering or add another ‘rule’ that helps you to declutter below.

Check out The 8 Rules of Fight Club

If you enjoyed this blog post, check out my latest book, Clutter-Free Forever.